Globalization Demobilization and Shadows of the Maker 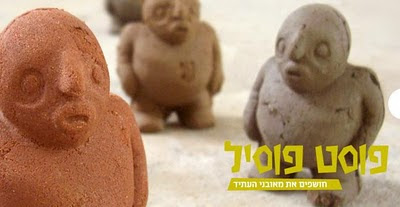 Last week on Shabbat I was sick. I had already been sick for a few days before and took some time on Shabbat to recuperate a bit. I slept in, prayed at home, and even tried to read the newspaper. While reading all about Egypt and how Facebook and social media in general was considered the spark point of unrest (or some such holier-than-thou ‘Social Media’ is the new deal nonsense), I stumbled across a really interesting article about an art and design exhibition that was exploring how a new generation of creative thinkers from around the world, having grown up in a globalized context, were looking at the world from a fundamentally different place then the rest of us old-timers that remember when it was a really anticipated event for movies (you know, from the movie theaters) to play on our TVs. These kids always had instant messaging, the internet, and anytime-anyplace access to movies, music, and online reading of any kind, just about anywhere in the world. The exhibition was positing that the latest trends, the cultural movements that will be defining who we are for years to come, will be emanating from members of a kind of ‘global village’ with its participants living and working from indigenous, and even remote, locations around the planet (no more traveling to the ‘big city’ to make it, I guess).

What attracted me to the article in the first place was this great image of a sumptuously carved wooden chair that’s back ascended up, becoming a ladder that served as legs for another sumptuously carved jug, about to pour its perceived contents upon the as yet unknown person seated in the chair. It reminded me of my days in graduate school, learning about Urban Art and Graffiti, Minimalist Sculpture, Earth Works, and art that seemed to penetrate to the core of any issue, as easily as gliding down a silicone trash heap with banana peel shoes…

We are introduced to the prototype of artists and craftsmen, Betzalel, in this week’s parsha. He was charged by Hashem to build the Mishkan (Tabernacle) with his assistant, Oholiab. Hashem gave them all of the creative juices and inspiration that they needed to build the House of God, as the Jews traveled through the inhospitable desert wasteland of the Sinai Peninsula. If we look closer at the name Betzalel, a striking concept comes to mind. In Hebrew, the word ’be’ means ‘in,’ the word ‘tzal’ means ‘shadow,’ and the word ‘El’ is one of the 70 names of God as they appear in the Five Books of Moses. I have heard a teacher make the claim that ‘in God’s shadow’ really means ‘in the image of God,’ but as an artist, I would like to get lower than that.

You see, within God’s shadow lays the creative forces in the world. It all started (from a theo-philo-sophical perspective) back in the Garden of Eden when the world was created with only ‘truth’ and ‘falsehood.’ Everything was either pure light or pure darkness. Eating from the Tree of the Knowledge between Good and Evil brought shadows into the world. The shadows were created by man and things like doubt, opinion, and subjectivity were introduced and have been clouding the collective mind of humanity ever since. So, when Betzalel is ‘within God’s shadow,’ what we are saying is that this shadow is the world before the gray existed. This shadow is not the one sewn by Adam and Eve. This is a shadow of truth in the world, the antimatter of matter, this shadow isn’t visible, but we know deep down that it is there. When Betzalel and Oholiab were given access to this vast unseen realm, of course they made art with it!

The word for artist in Hebrew is ‘oman’ and the word for craftsman is ‘uman.’ Both words are spelled the same, but with different vowels for pronunciation. ‘Aleph, Mem, Nun-sofit,’ is also the root for belief or faith. The word ‘amen’ (אמן) in Hebrew means we have faith, we agree. An artist or craftsmen uses the dark, unseen realm of the world to perceive hidden truths and then to express them. By bringing out the inner dimension of something, whether it is an idea or a finite object, the artist is revealing it, essentially birthing it, into the sensatory spectrum of the finite world. To do this, an artist needs a kind of Emunah (אמונה) or faith, just to be able to navigate these hidden paths within the dark half of the truth.

So, when these young artists are now making art in little South American villages and in the snow covered wastelands of Arctic Siberia, and still travel around on the airwaves or in airplanes to attend exhibitions, gatherings, and other art-happenings around the world, they have essentially made the entire globe a village, our village. I have yet to see the exhibition, but the one thing that see 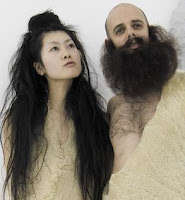 med to be missing from the article I read was, well, you see, it described all of the globalization demobilization, but was missing something... like; it was missing a kind of spiritual depth. All of the artists seemed to be referring to cavemen and dinosaurs in some way and the article itself even co-opted the same gray-zone thinking and acceptance that mankind has, without a doubt and never should be questioned, evolved into these blossoming brain beings from lower animal creepy crawly life forms… end of story.

To me, if that is truly what the show is about, it must just be another brainchild of a Post-Darwinian self-evisceration of the black and white truth… Go directly to the gray zone and don’t pass go... type of show... Maybe I’ll bring my portfolio. You never know. The show may need a little black and white truth, sucked up through one of those crazy straws, from the deep black shadows that are hiding out of sight somewhere in the Garden of Eden... just to 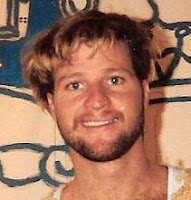 tie the whole concept together, I mean...