Was there a Plague of Mud? 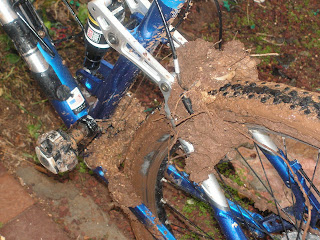 At the end of last week, Yom Shishi (Friday) started great! I opened my eyes, said the Moday Ani Prayer for the first time (I just memorized it the day before at work), and started the laundry. Don’t worry, this is not another I lost my phone in the mechona ha’kvisah (washing mashing) story, however it does involve my bike. You see, since I am now Shomer Shabbat I can’t ride my mountain bike on Shabbat. Why you ask (for those of you non-Jews or non-religious)? Don’t ask, it is a long story that maybe I will tell another time. So, I needed to get a mountain bike ride in that day, on Yom Shishi. And it didn’t matter that it had been raining for a few days prior. I got all geared up for the rain and the cold. I had 2 liters of water, a banana, warm leggings, gloves, and a rain jacket. I stuffed everything in the Camel-Back tarmiel gav (back pack), jumped on my bike and headed up the street with Dude the dog in tow.

Well, I guess I should back up a little. You see, after my blog about my bike damage when I fixed it Israeli style with just some duct tape, I decided to get a little high tech on it. At work, I went over to the Binian Alou (the Aluminum Building) and found a section of aluminum pipe that when I cut it and bent it a bit, I could apply epoxy to it and snap it down right over the frame damage. It seemed to work great and after some cleaning, tweaking, and bike tuning, my bike now has a new name, ‘The Opheniminator”! (ophenime in Hebrew is bicycle) anyways, now I am back on the trails… or would like to be, if it wasn’t for all this rain and darkness on my free time. Which makes it all the more important that on Yom Shishi I get a good ride in.

With that in mind, the Parsha of the week was Va’eira and was about the beginning of the plagues in Egypt that began the Israelite’s mad dash to the border of Israel and the Promised Land beyond. These plagues started with foul dead fish water and a bloody Nile. They went through frogs (or crocodiles depending on the translation) that were not only in everything but were inside every Egyptian (eewww!), lice (you remember ‘keeneem’ the Boulder breakfast cereal sounding plague from an earlier blog), wild beasts that rampaged through every home and all the Egyptian lands (think Jumanji), the sickness and death of all of the Egyptian livestock, and the fiery hail storms that struck down every living thing in its path.

At the time, I hadn’t had time yet to read the Parsha of the week, however while on my lovely little tee’oul (trip) on my bike on Yom Shishi it started to drizzle a little. “Oh,” I thought, it will just blow over and besides, I am prepared for everything! So, I continued on, around the construction site near my house, down the hill and through the other giant monstrosity of a construction site called Holomote Zichron (Zichron Dreams), more like a nightmare if you ask me… And then, to the trail head where it was so amazingly fun to bounce over these little rocks and through the sand and then the mud…for about 10 seconds! My bike was fine, but the mud was very sticky. I got up the hill, half pushing and at the top my bike stopped completely. The mud was so thickly packed into every crevice of my bike that neither wheel would spin. I had to carry it down the mountain and at the time, had some pretty terrible thoughts about my new lifestyle…

These thoughts lasted for also about ten seconds before a sublime knowing crept into my awareness. This story from the Torah Fax that I get tells it all.

Rabbi Schneur Zalmen had a Chasid who was a wealthy wine merchant. Once, the Chasid was notified that two hundred wagons of wine were confiscated by Russian officials at the border.

Upon hearing this he fainted. He had invested everything he owned in this transport and now it was in danger of being lost. Each time the merchant regained his senses; he remembered his misfortune and fainted again.

When Rabbi Schneur Zalmen heard this, he said, "Tell the merchant not to worry. His wine is safe."

Indeed, when Chassidim went to look for the wagons, they found them safe at the side of the road near the border.

The Chassidim then said to the Rebbe, "You claim that you don't perform any miracles, yet we see that you knew that the merchant's wine was safe! Isn't this a miracle?"

The Rebbe answered, "Our sages tell us that G-d never gives a person pain or tests which they cannot handle. When I heard that his suffering was beyond his endurance, I knew it was a mistake and his wine must be safe!"

The same was with the Jewish people in Egypt. When G-d saw that their pain and suffering was so great and beyond tolerance, that they didn't even listen to Moshe who brought the news of their redemption, G-d immediately told Moshe to go to Pharaoh and tell him to let the children of Israel out of Egypt!

Isn’t that perfect! It even ties in the Parsha of the week!