The World, According to Josh 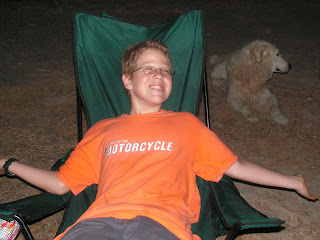 About one month ago, the weather started to cool down a lot. Not like in Boulder, but cold never-the-less. There is a damp breeze that can blow in sometimes, and when it does it can really take you by surprise. When we moved to the Middle East we pretty much gave away most of our warm stuff, bringing our snowboarding stuff, of course, but mostly out of a sense of sentimental attachment. We have been through one winter here, but this one really seemed to hit us hard. Maybe it was the extended (shvitah, strike) from the kids’ school that threw us all off. Maybe we were just so overwhelmed from the move that we didn’t notice the first time around. What ever reason it was, we all got sick this year and, of course, we all handled it in our own unique ways.

During the year, Zach got sick, pretended he wasn’t so he could stay out all night on the weekends, made it to about Tuesday each week, and then, oops… needed to stay home from school on that one really hard day with all the math and stuff; just to collect his strength mind you. Adele, on the other hand, didn’t stop working. She, however, got even sicker and then still didn’t stop working. Over the period of times that I was sick, there were three times, I remember, that I had to leave work to crash on the couch in the middle of the day. But that leaves Mr. Josh who it seems has really got us all beat. Josh was just getting back into the swing of things at school when he had a major falling out with his one friend that, during the shvitah, couldn’t leave him alone (no pun intended - his name is Alon). Josh was devastated and depressed. Then he got sick. He stayed home from school one day, went the next, made it through the weekend, came home from school halfway through Sunday, and then basically stayed home the whole rest of the week, until Tuesday or Wednesday (I forget now) when he went to school for, once again, half of a day.

Adele was in Modi’in, an hour plus drive away, and had to turn around and come and pick him up from school. His whole face was now hurting him and they immediately went to the local Doc here in Zichron who sent him for x-rays… aye ya yaey… the next day the results came in and it turned out that he had puss in his sinuses. They had to check with another doc. who happened to be working in the local Arab village of Faradis that day, and after getting lost and finally finding the stupid little alley hidden behind the bus stop we were instructed to check into a hospital… aye ya yaey!

So now Josh has been in the Pediatric Ward of a Hospital called B’nei Zion in Haifa. He is on intravenous antibiotics, caustic nose drops, and a kind of cocaine nose plug deal that is like sticking gauze wrapped noodles a few inches up his nose three times a day. With that description you would think he would be pretty upset, wouldn’t you? Well, when he found out that he was going to get his own little T.V. to watch and room service and everything, all the bad stuff just seemed to melt away, or maybe that is what he wanted us to think… you see, I have this theory about Josh.

I think that Josh is really one of the most amazing people that I have ever had the opportunity to know. He is so, just, full of life that sometimes it is really hard to know what is really going on with him. He is constantly exploding with whatever is the soup-de-jour. Sometimes it is really very hard to take in, and other times… it is a gift from Hashem. You really just never know what to expect from him but I think that eventually, with lots of love and lots and lots of patience, he will really make something of himself; Maybe an Artist or a Lawyer, or maybe a Business man or a Doctor. Well, maybe he will just play one or all of those on T.V. Neereh, let’s just get him home and healthy first. Send your blessings and prayers to,